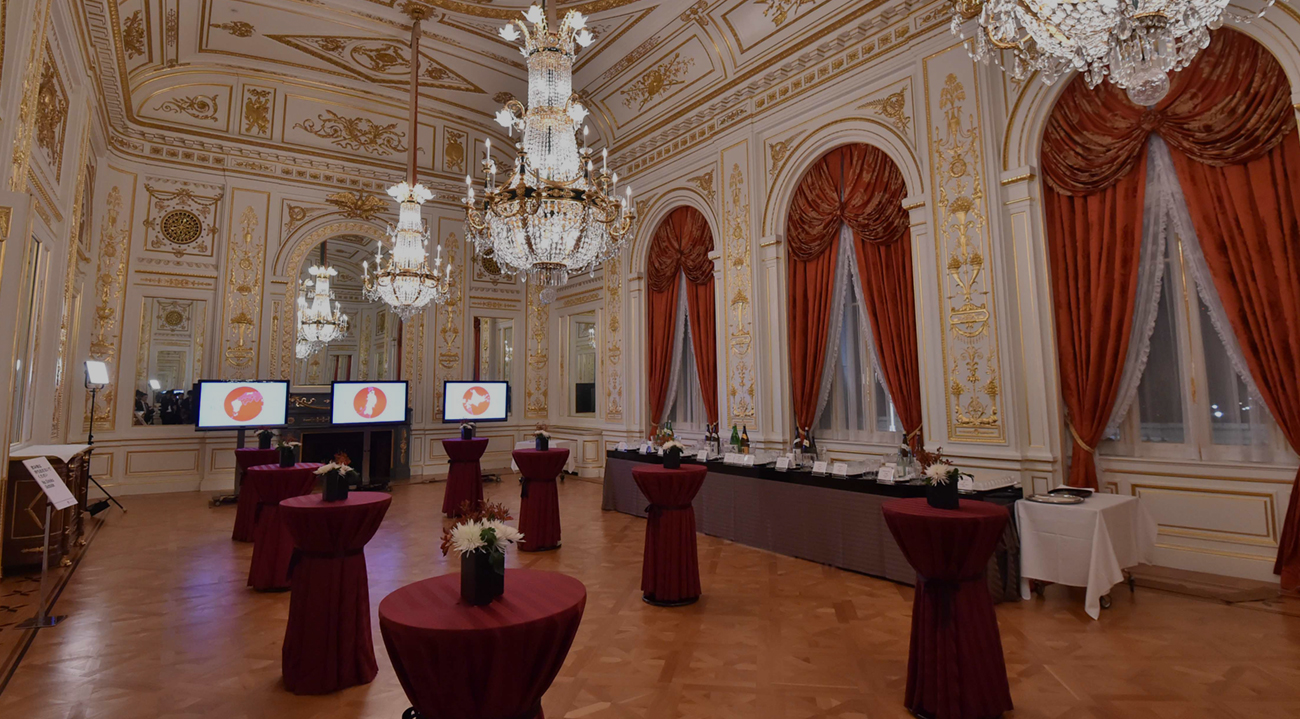 The Akasaka State Guest House, since opening in 1974, continues to provide accommodation for state and official guests of the Japanese government, including monarchs, presidents and prime ministers from countries all over the world. It serves as a splendid stage for diplomatic activities, such as welcoming ceremonies, and meetings and receptions attended by leading figures in the political, business and academic circles. It has also functioned as a venue for such important international conferences as the Tokyo G7 Summit meetings in 1979, 1986 and 1993 and the Japan-ASEAN Commemorative Summit of 2003.

The Akasaka State Guest House was originally constructed as the Crown Prince`s Palace. Construction started in 1899, just 31 years after the end of feudalism in Japan, and the Palace was completed in 1909. The site chosen for the Palace was a part of the Edo (present-day Tokyo) mansion of the Kishu Tokugawa family. (the Kishu Tokugawa family was one of the three cadet branches of the ruling Tokugawa Shogunate, and thus he was one of the most powerful feudal lords in Japan.)

The building itself is the only neo-Baroque European-style palace in Japan. It is constructed of brick, around a steel frame, on three floors, two above and one below ground, and is both earthquake and fire resistant. The State Guest House underwent further extensive repair work between 2006 and 2009, after which the former Crown Prince’s Palace main building, the front gates, and the fountain on the South face of the palace were designated as National Treasures. 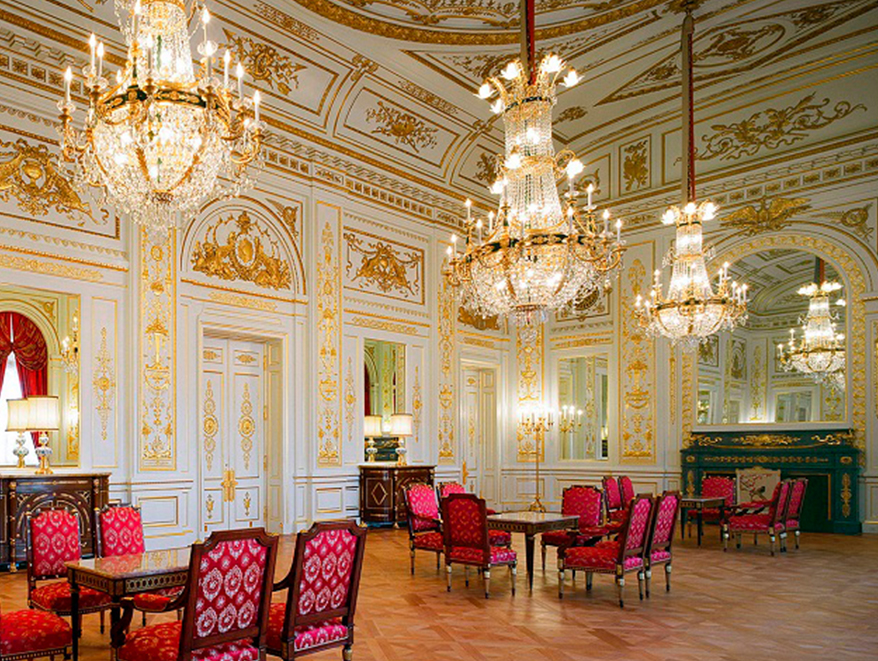 This large reception room is situated over the main entrance to the Palace. It is decorated in the early 19th century Empire style. The Empire style, which takes its name from the rule of Napoleon I in the First French Empire, drew inspiration from the glories of Imperial Rome.
Gilded stucco reliefs of flying horses, suits of armor, helmets, swords, arrows, horns, and sphinxes adorn the white ceiling and walls. The ceiling is delineated into panels in imitation of a campaign tent. Ten large wall mirrors reflect back the light from the three massive crystal chandeliers. The center chandelier is larger than the chandeliers on either side, and all three are suspended from the ceiling by chains festooned with red, yellow and green ribbons, as are the chandeliers in the Grand Trianon at Versailles. At either end of the room, above the mirrors over the grey French marble fireplaces, and in carvings to the sides of the fireplaces, are gilded Sairan birds, from which this room takes its name. The Ran bird is a mythical bird with brilliant multi-colored plumage, similar in form to a pheasant, with a beautiful song, and held to be the male young of the mythical phoenix bird. Since the phoenix is used as the symbol of the Emperor, the Ran, as the male young of the phoenix, is the perfect decorative theme for the Palace of the Crown Prince. 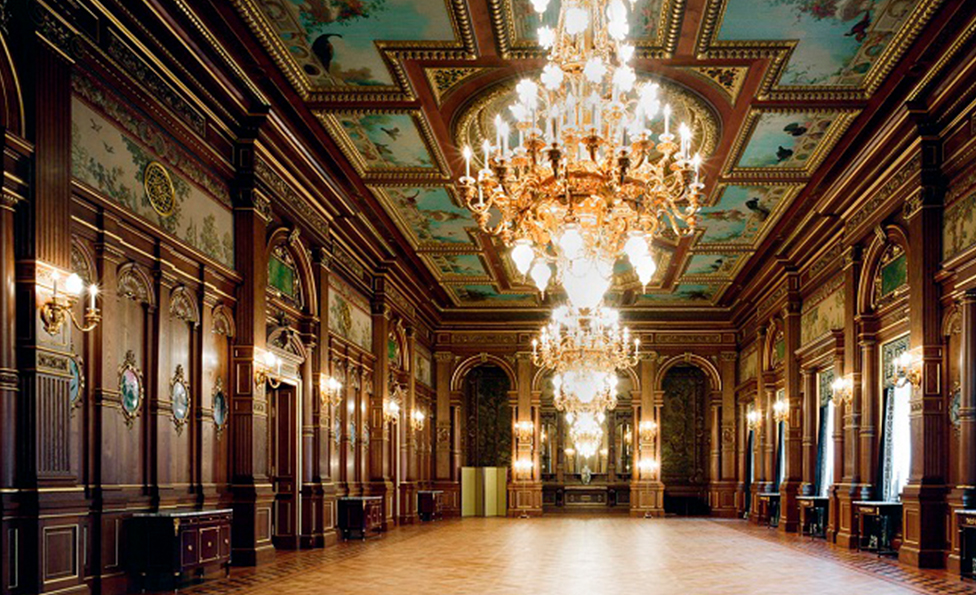 The name of this room, which means the Room of Flowers and Birds, derives from the various flowers and birds depicted in the 36 oil paintings on the ceiling, in the Japanese replicas of the original Gobelin tapestries over the windows, and in the 30 elliptical Japanese cloisonné plaques inset in the wall paneling.
This room is in the Henri II style of the late 16th century. It has three massive ormolu chandeliers, each weighing 1,125 kilograms, which are the heaviest in the State Guest House. There is a massive buffet, imported from France when the Palace was built, on the North wall, to your left as you enter the room, on either side of which are replacements for the original Gobelin tapestries, depicting hunting scenes.
The boiserie wood paneling of Japanese ash is inset with the cloisonné panels that are the most important feature of this room. The design of these panels was commissioned from the Japanese traditional painter, Seitei Watanabe (1851 – 1918), and the panels were made in the cloisonné workshop of Sosuke Namikawa (1847 – 1910). Sosuke Namikawa is one of the most highly regarded craftsmen in cloisonné and his works are very highly prized, which makes this original group of 30 plaques extremely important. This room is mainly used for official banquets, hosted by state and official guests, and can seat up to 130.

Originally designed as a ballroom, the name of this room derives from the scene from the Noh play Hagoromo (Robe of Heaven) painted on the ceiling. In this legend, a heavenly maiden uses a magical robe to come down to earth in the form of a swan. She takes off the robe in order to bathe, assuming the form of a woman, and is seen by a man who falls in love with her. He hides the heavenly robe so that the maiden may not return to heaven. The scene shown here is the stanza “Flower petals are dancing in the sky. I hear music. A wonderful perfume fills the air.”
This room is in the French 18th-century classical style. The walls are decorated with stucco reliefs of musical instruments, music scores and masks, amongst which include Japanese musical instruments, such as the Japanese flute and drum. The mezzanine orchestra box is a legacy of the room’s function as a ballroom. The three chandeliers are the most magnificent in the State Guest House, with each one three meters in height and weighing 800 kilograms, made up of some 7,000 components, and holding 84 light bulbs.
This room is used for welcoming ceremonies in case of inclement weather, for the reception of foreign diplomats and for conferences. Drinks before and after an official banquet held in the Kacho no Ma are served to the guests here in this room. 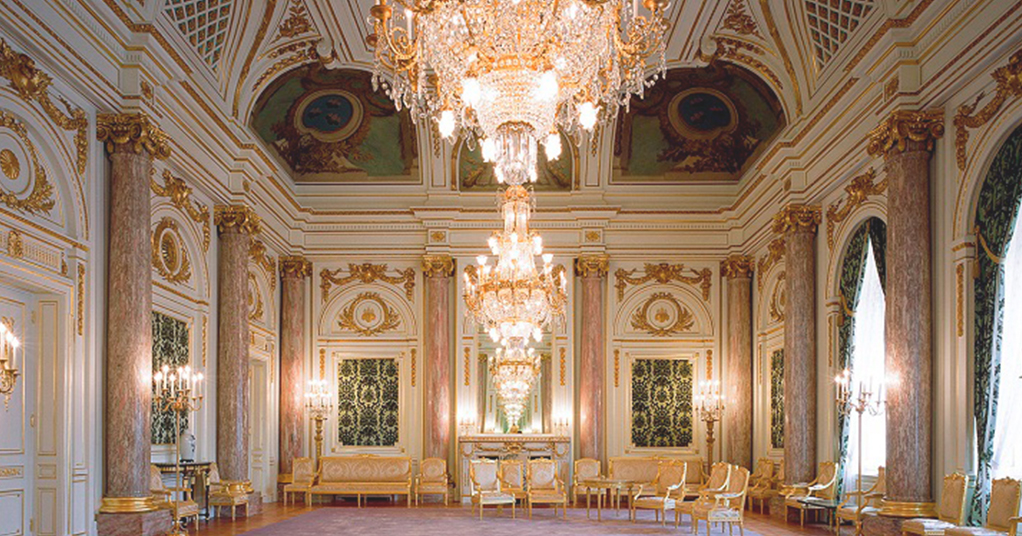 The Asahi no Ma, with a floor space of 180 square meters, and also decorated in the French 18th-century classical style, is the most important and formal of the State Rooms within the Palace, equating perhaps to the Throne Room in European palaces. The name of this room, the Salon of the Morning Sun, derives from the painting on the ceiling of Aurora, Roman goddess of the dawn, who renews herself every morning and flies across the sky announcing the arrival of the sun. Interestingly, the flowering branches around the edges of this painting are cherry blossoms, which theme has been picked up by the design of the carpet, which is woven from 47 different shades of purple.
At either end of this room, in the curved section of the ceiling above the columns, there is a painting of a lion with a chain in its mouth, between two suits of Japanese armor, and below a Japanese helmet. The eyes of the lion are trompe l’oeil and appear to follow the viewer around the room. In the corners, the coats of arms are the three leaves with three flower spikes (with 5, 7 and 5 flowers) of the paulownia tree, which is one of the symbols of the Imperial Family and is now also used by the Japanese government. It is included as part of the Order of the Rising Sun. It was believed that the mythical phoenix bird, the symbol of the Emperor, lived in a paulownia tree. The ceiling is supported by 16 massive pillars of Norwegian Rose marble.
The curtains and the wallpaper panels on the walls are made of velvet-flocked silk damask, which became fashionable in France in the 18th century. This cloth was woven in Nishijin in Kyoto, which is famous for weaving silk.
This room is now used for courtesy calls made by state and official guests, as well as for summit meetings. 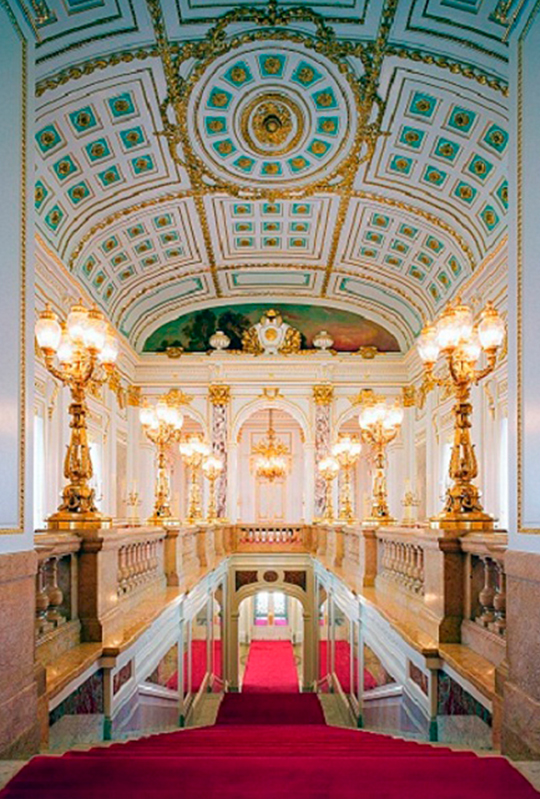 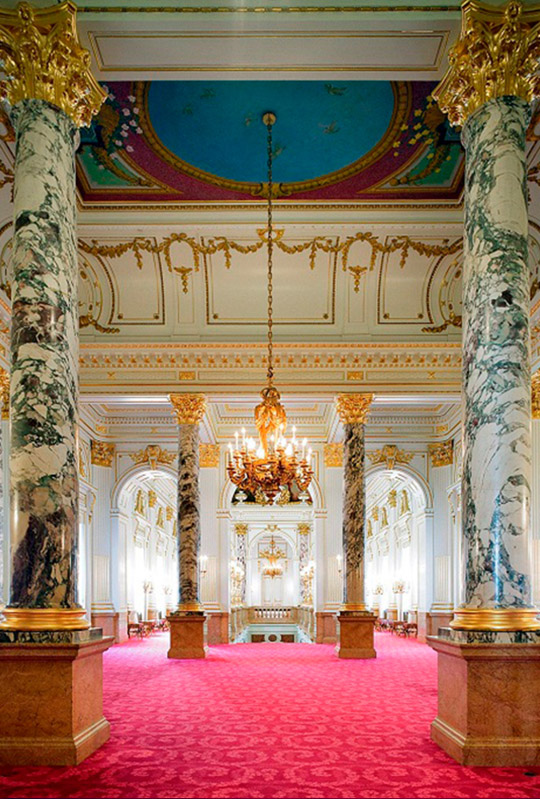 Official guests enter the Guest House through the central doors into the Entrance Hall, which is paved with Japanese black stone and Italian white marble, before climbing the Grand Staircase. Precious marbles from all over the world are used extensively in the Entrance Hall and the Grand Staircase. The columns in the Entrance Hall are made of French marble.
French mosaics decorate the floor in the small hall before the staircase, as well as the corridors leading to the East and West Entrances. The magnificent staircase itself is made from Italian white marble from Carrara, and beautiful Rouge du France marble in large panels, also used in the Entrance Hall, decorates the walls on either side of the staircase. At the top of the stairs in the ceiling arch is a painting in oils of a landscape as the sun rises, which is paired on the opposite side of the Grand Staircase hall with a landscape at dusk, in front of which is the chrysanthemum emblem of the Japanese Imperial House. The two half columns at the top of the staircase are trompe l`oeil, painted in imitation of marble, which was widely used in Baroque palace architecture in Europe.
At the top of the staircase, and before climbing the Asahi no Ma is a large hall, decorated in the French taste of the late 18th century. The ceiling, 8.2 meters from the floor, is supported by 8 breche violette marble columns from Italy. In 1974, Professor Shunichi Terada of the Tokyo National University of Fine Arts and Music was commissioned to paint the ceiling. The title of the painting is “The Seventh Heaven”. In the same year, Mr. Ryohei Koiso was commissioned to paint the large paintings at the far end of the hall, flanking the entrance to the Asahi no Ma. On the left is “Painting”, and on the right is “Music”. 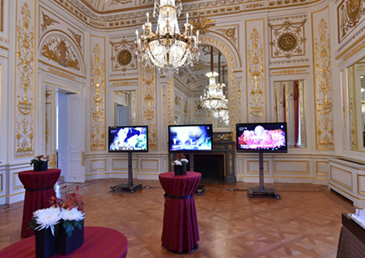 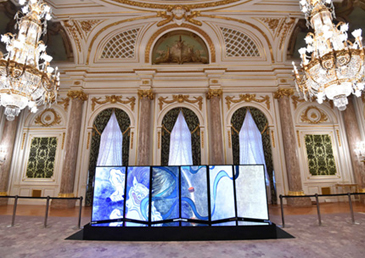 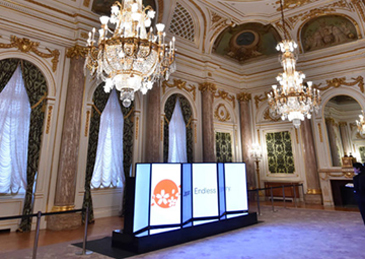 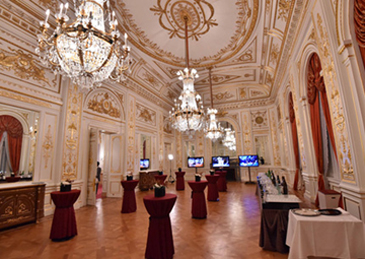 Enter your proposal or inquiry.
Our staff will get back to you with the relevant information.

Browse our booklets, pictures and videos library and find the right tools to help you promote your MICE event in Japan.

Look here for an original venue for your event, a location that is not primarily destined to host a MICE event. Museums, temples, sports venues and more can be adapted to your requirements. Ask us.

A compendium of our best rated cities, taking into account venues, transportation, ease of access, accomodation offer and sustainability, for hosting a MICE event.

JNTO will be exhibiting at